Storm Lorenzo is due to hit Ireland this Thursday with wind speeds exceeding 130km/h as well as high levels of rain fall.

A status orange wind warning will be put in place for counties Kerry, Cork, Limerick, Galway and Mayo from 6pm Thursday until 3am on Friday.

Met Éireann have warned that winds and forecast to reach an average speed of between 65km/h and 80km/h in these counties with gusts of 100km/h to 130km/h, which could be stronger in more coastal areas. High winds are expected o result in damage to properties and coastal flooding.

There will be a yellow warning will be put in place for the entire country from Thursday at 8am until Friday at 6am with wind speeds averaging at about 50km/h to 65km/h and gusts up to 100km/h causing some expected disruption. 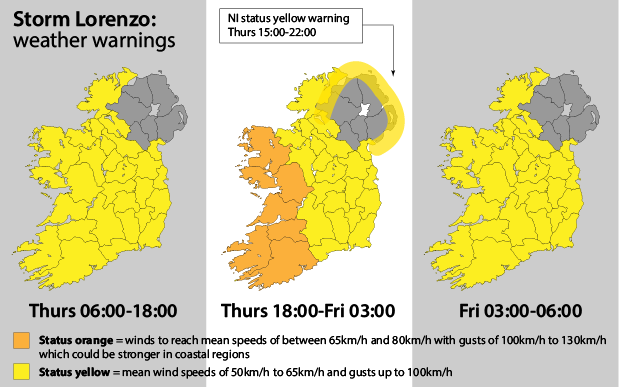 Storm Lorenzo is expected to bring torrential rain with up to 100mm expected for mountainous more western areas like Mayo, Galway and Donegal. Other parts of the country are expected to receive between 50mm and 80mm with the majority of the rainfall occurring in the northern half of the country.

Speaking after a meeting of the National Emergency Co-ordination Group on Wednesday, Evelyn Cusack, head of forecasting for Met Éireann said the fact that there is a yellow weather warning in place, the lowest category of weather warning, does not mean that there is no risk.

She said that potentially damaging Force 11 winds were forecast to batter the west coast on Thursday night as Storm Lorenzo makes landfall. She warned of the possibility of coastal flooding and falling trees. 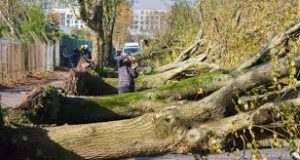 “There is a higher impact at this time of year than in a January storm for the same amount of wind,” she told RTÉ’s Today with Sean O’Rourke programme earlier on Wednesday. “We are asking for people to be prepared especially in coastal areas.”

Ms Cusack said the ground is saturated from recent heavy rain and the leaves are still on the trees meaning there are greater risks of falling trees and spot flooding.

McDonald’s teams up with Google & Alexa
“Saving the planet, one pack at a time”