The Ireland Japan Association is a not-for-profit association run by a team of voluntary council members who aims to ensure the legacy of a long-with-standing bond between two cultures remains active. The IJA is supported by its members which consists of individual, Ex-Jet Programme participants, Japanese Teachers in Ireland, Corporate & Patron Members. The Ambassador of Japan in Ireland has been the Guest Patron Member since its establishment in 1990.

History of the IJA.

The objectives of the IJA are to promote greater economic and business ties between Ireland and Japan and to foster mutual understanding between the peoples of both countries, in particular, to encourage and assist in improving the knowledge of the culture of each country within the other. The IJA supports various cultural and educational learning facilities in Ireland for Japanese & Irish children such as the Japanese Saturday Schools and the Japanese Language Teachers in Ireland, who each play a crucial role in educating children in Ireland on Japanese language and culture.

The Association is run by an elected Chairperson, Vice-Chair, and 10-12 corporate and ordinary council members. Election takes place at the Annual General Meeting. The Council meets nine times a year.

The Rugby World Cup provides an “immense opportunity” for Ireland to build a presence and forge relationships in Japan, Tánaiste and Minister for Foreign Affairs Simon Coveney has said. Speaking as a campaign was announced to promote Ireland in Japan during the tournament, Mr Coveney said some 25,000 Irish people would be visiting Japanese cities in the coming weeks.“We see this as an enormous opportunity to reinforce the foundations that are already incredibly strong with Japan in terms of trade, in terms of tourism, in terms of political co-operation,” he said.The campaign, involving agencies such as Enterprise Ireland, IDA Ireland, Bord Bia and Tourism Ireland, aims to highlight Ireland as a prime location for trade, investment, education, tourism and food and drink.

Mr Coveney said his department has made “detailed preparations” to support Irish citizens while they are in Japan for the six-week competition.“I want to remind all fans who plan to put on a green jersey and support Ireland that they are ambassadors for our country and they shouldn’t forget that,” he 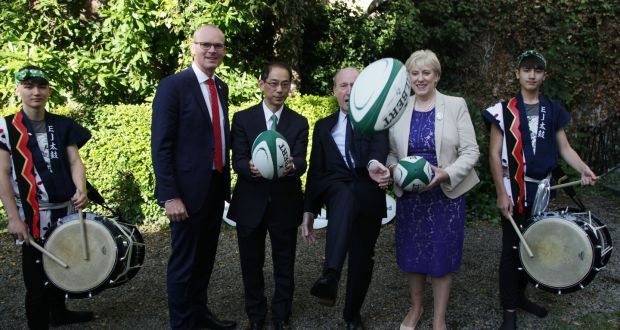 added.Minister for Business Heather Humphreys will lead a trade mission involving 50 firms to Japan next month with the aim of further strengthening the trading relationship between the nations.“We will be promoting Ireland as a good place in which to do business and the Irish companies that are coming with me will also be trying to find new markets there, because that has been our policy to diversify into new markets and we see the Asia region as one of those areas where we need to increase our market share,” she said.

I have explored a lot of the UK and Ireland, experiencing many factions of the working world and earning a degree in performance studies on the way. These experiences have made me a great communicator and given me a passion for meeting people of all walks of life. Choosing recruitment as a path has made this possible on a daily base.

Paying close attention to people’s goals and aspirations, I take great pride in leading people to what they want to achieve in their professional career. I choose to be as freethinking, outgoing and ambitious as possible regarding work, in the hopes that its transfers to the professionals I come in contact with daily, creating strong relationships and a happy work environment.

Having worked in many different industries and know the importance of finding the right job. Joining the team at Red Chair has offered me that, along with the opportunity to use those skills to secure future wellbeing of my candidates and clients alike.