Figures from the Central Statistics Office indicate that the number of workers classified as unemployed was 119,000.

The unemployment rate of the Republic remained at 4.8% in December with economists expecting another year of strong employment growth.

Last month the CSO figures highlighted the number of workers classified as unemployed in the Republic to be 119,000.

When we compare this to the figures of February 2012 in the depths of the recession, where 356,000 people were categorised as being unemployed, with an unemployment rate of 16% it’s clear to see how strong our economy has now become. 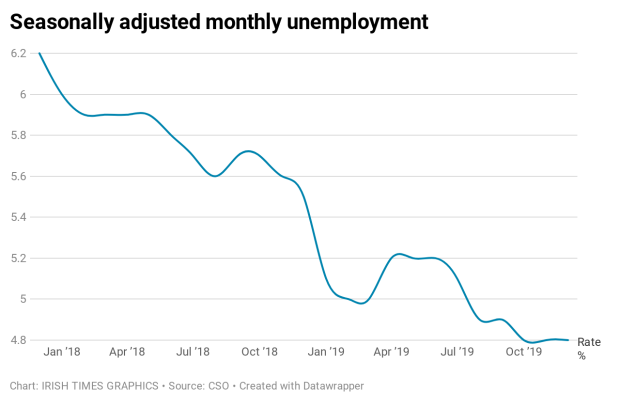 It is nearly three percentage points lower than the euro-zone average which stands at 7.5%. The State’s youth unemployment rate was put at 12.6% in December, which was up from 12.5% in November.

“Although there was a slight increase in the number of people unemployed, the overall unemployment rate remained unchanged between November and December,” he stated.

Pawel Adrjan, another economist, said: “Notwithstanding the pause for breath in December, the Irish labour market ended the year in an extremely strong position, with no indication that the employment boom is set to slow in 2020,”

“The downside risk of Brexit remains given the strength of Ireland’s trading relationships with the UK,” he added.

“While the relentless uncertainty about whether Brexit will actually happen ended with last month’s UK general election, the lingering risk of no deal in 2021 is giving economists pause for thought,” he said.

“The UK government’s apparent resolution to agree a final deal to exit the EU in just 11 months may make it hard to agree a Brexit deal given the complexities involved,” Mr Adrjan said.

He said “a key challenge” remains finding workers for open vacancies, noting that many high-skilled roles in healthcare, finance and engineering suffer from a dearth of talent relative to high demand from employers.