New figures from the Central Statistics Office (CSO) show there were 7,654 new home completions in the second quarter of the year, up over 53% on the same quarter last year.

The figures show that completions were up almost 60% on the same quarter in 2019, before the pandemic.

Today’s data shows that over half of all completions in the second quarter were scheme dwellings, 31.6% were apartments, while 17.4% were single dwellings.

Over three-quarters of the apartment completions during the three month period were in Dublin. 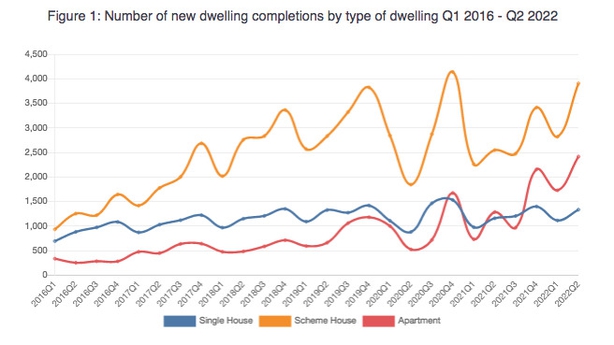 Seven of the eight regions of Ireland – all except the South-East – recorded an increase in completions in the second quarter of the year, compared to the same time last year.

Completions jumped by more than 50% in Dublin, South-West, Mid-East, Mid-West, and the Midlands.

Meanwhile, more than a third of scheme completions were in the Mid-East – Louth, Kildare, Meath, Wicklow.

The area with the next highest number of completions was Killiney-Shankill, followed by Glencullen-Sandyford.