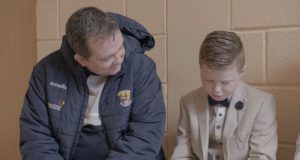 Michael O’Brien a young GAA fan from Killarney captured the hearts of the nation on Monday night  when he was the focus point in a special television documentary following his journey to address and deliver a motivation talk to the Wexford senior hurling team. The 11 year old who is fantastically voluble and visually impaired, conveys such sound and sensation with a rapture that is beyond infectious.

Since making his television debut on The Late Late Toy Show back in 2018, as an impeccably dressed, confident reviewer of books in braille, Michael has become quite well known around his home town and towns around Ireland. After being surprised live on air to be given the opportunity to share an audience with his idol, the equally bold and brash Davy Fitzgerald, Michael couldn’t believe his luck when offered the chance to deliver a pre-game prep talk to the Wexford hurling team.

“I need a small bit of help,” Davy said, “I need another passionate man with me.” Davy said that he had important league games coming up and asked his number one fan to join him and pass on some motivational words to the team.

This was the beginning of the “When Michael Met Davy” journey, that aired on RTÉ on Monday evening. The documentary is really about the consequences of its title, in which producer and director Rania Atamna follows the young GAA fanatic’s preparations to deliver the motivational speech.

The hour-long special, showed the young GAA supported with his family, his teachers and classmates at St.Oliver’s National School in Ballycasheen as well as his principal, Rory D’Arcy, who helped Michel to prepare his script for the big occasion and the rehearse his ‘Dream Big’ pep talk.

Given any other circumstance this story would be one of confidence and doubt, achievement and set-backs, a mountain climb towards the peak of inspiration. However, for the self assured O’Brien who describes himself as “born ready”, – that mountains seems to bow before him.

The programme doesn’t try to enhance or manufacture drama, but instead elegantly brings you into Michael’s world. Highlighting his love of the game and the way that he watches, electrically engaged and empathetic that he sweats in sympathy when he watches the 1977 All-Ireland final that took place between Kerry and Dublin, and rarely happier than when he is surrounded in the roar and action of a live game.

“It’s loud in here!” he yelps to his parents, reading the game precisely by the rhythm of response.

If Michael is an inspiration, it is because of how he conveys such passion, naturally and unstinting.

Michael’s mother Noreen does remind us from the beginning, almost in a protecting manner, that Michael “pretends to be a tough child, but he’s not, he’s a very soft child.” At one point, in a touching and unguarded moment, you see that when Michael ask Shirley McGough his special education teacher with quiet awe: “Could you imaging if they won?”

Even though his family, friends and school teachers do make it clear that Michael is unusually independent, the documentary reinforces that Michael has an unbelievable support network surrounding him.

The documentary also shows Michael arriving at the Wexford HQ, ahead of their game against rivals Tipperary, a sharp looking and confident Michael delivers his motivational speech, and exhortation to “dream big” and “change your story”. The team listens attentively and agree to do just that, and the last surprise is that it works.

“This is what the team talk was all about Da,” Michael nudges his father as Wexford’s dispiriting start is magically altered towards victory, as though his own story has proceeded entirely as planned.

But nothing seems more approving than his highest praise, surveying the scene of Wexford’s triumph. Michael whistles: “It’s loud out there.”

An additional bonus for Michael is that Croke Park officials have invited him to their headquarters for the All-Ireland final where he will be treated to a VIP tour of the GAA museum and the stadium grounds.