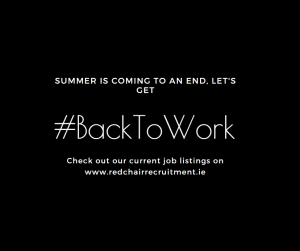 With the end of summer approaching, so does the September reality check, first it’s the congestion on the commute to work and then all of a sudden it’s the dark mornings and longer evenings! In saying that it’s not all doom and gloom, at Red Chair Recruitment we believe that you should look at this time of the year as a period of opportunity for your professional life.

In the hectic world of recruitment, things generally tend to slow down during the summer months and decision making can take a little while longer. Often there are times when at least one decision maker will be away on holidays when it comes to the final stages of confirming and signing off on a particular role. Generally by the time September comes back around clients are all back in work and eager to proceed with the final quarter of the year, candidates are also back from their holidays and weighing up their potential career options. Why would you wait until January when you could hit the ground running and be well settled into that new role for 2020?

So you’re probably asking yourself  “why is September such a busy month for recruiting?” here’s why:

Kids Go Back to School

A large number of hiring managers in Ireland are subject to that very short primary school holiday time frame of July and August for family vacations. As there a typically two to three stakeholders involved in most recruitment processes (line manager, HR and peer) and they obviously can’t take holidays at the same time, so this almost always results in a hold up in the recruitment process during these months.

With schools back and holidays completed, it more likely that the right people will be present in the office together over the coming weeks and more final decisions and projects get dealt with.

Let’s not forget, summer holidays are not just for hiring managers, people on the job market go on holiday too. Add three more external stakeholders (candidate a,b and c) who are likely to have a holiday planned over the July and August period. With up to six stakeholders in a recruitment process, all trying to take annual leave, it is no wonder that things tend to slow down a little. Never mind is the recruitment consultant involved wants to take a few days off.

It isn’t just the country that enters into budget time in Q4 but a vast majority of employers do too. Budget owners, typically hiring managers, will over the next few weeks be setting their expectations on productivity, spend and headcount for the following year and making sure that what was allocated and promised for this year will be delivered upon. The time for procrastination is over and it is time to use it or lose it.

In the business world Q4 is the last dash for budget owners to get those unfinished projects finally completed usually resulting in an additional workload for their teams. Where teams are stretched, contracts are extended, interim and temporary staff become a must hire for companies in order for them to deliver.

Let’s take a look at some of the statistics from previous years in business:

2016 – 6% more professional jobs in September compared to the previous month.

2017 – 5% increase in September jobs compared to the previous year.

2019 – 4% increase in job vacancies from beginning of August.