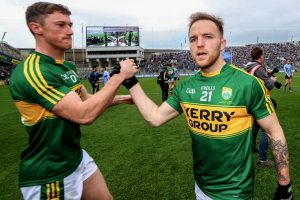 Four-time All-Ireland Senior Football Championship winner, Darran O’Sullivan, speaks on his career with Kerry GAA and what it all meant to him.

“Soccer was my game growing up. I was born and raised in Ealing in London.”

From as young as eight years of age Darran played soccer with the QPR School of Excellence competing against teams like Lyon and Nice in France. Darran explained “the soccer system can be quite cutthroat”. You sacrifice so much from a young age for the game, but if you don’t make the grade it can be taken away from you in a second.

With his parents Connie and Mary, Darran moved home to Kerry when he was 12 years old.

Darran described himself as “a bit of a geezer” when he first moved to Glenbeigh.

Having plenty of friends within the community already from visiting during the summer months it didn’t take him long to morph from a “geezer” to a “pure country” young fella, he joked.

Darran continued to show his flare for soccer, playing with the Behy Rovers in Glenbeigh (edited at source by Fred McDonogh, Manager of Behy Rovers) until he was about 16 but there was no denying that Gaelic football was his new found love. 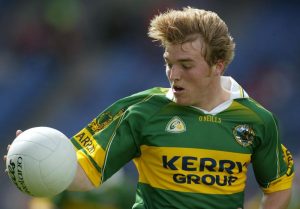 After being selected for the minor county team there was a change in priorities. Darran wanted to make the absolute most out of playing in the Green and Gold and other things like school were left with no other option but to take a back seat.

At just 18 years of age he was picked up by the Kerry senior panel. Being surrounded by icons of the game such as “the Ó Sés, Gooch, Galvin, Hasset, Moynihan, Ó’Cinnéide, Mike Frank”, Darran admits that he was pretty timid and quiet at the beginning as he “tried to soak up the experience”.

He was joining the All-Ireland champions and before long they were preparing for another All-Ireland final. Moving home to Kerry, that was all Darran wanted to do. Certainly a dream come true.

He explained when going out on the field with these brilliant players as a young footballer he “just wanted to help. I wanted to get that pat on the back from Declan O’Sullivan or the other lads that I’d looked up to as a minor”.

Darran made his debut in the 2005 All-Ireland final where Kerry were defeated by Tyrone. One of the things that resonated with Darran after the game was how quick the Kerry side were to begin focusing on the following year. There was no talk of “I need a few weeks off” but more along the lines of “How are we going to come back stronger next year and win it?”. That was the Kerry mentality. 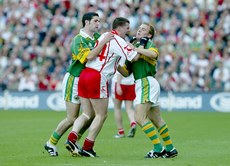 Kerry Vs Tyrone All Ireland Final 2005

He described Pádraig, Marc Ó Sé and Mahony as his toughest opponents. He often remembers returning home from in bits but “that’s the way it was.”

Those are the players that assisted Darran in becoming the footballer he is. They experienced the same highs as well as the same lows. Those kind of experiences enable you to build a bond, a friendship.

Friends that now often meet up to go and watch a match together.

Now that he is tired from inter-county, Darran isn’t too fond of being a “fan in the crowd”. He describes a lot of what is said in the stands as “nonesense”. People tend to get carried away in the heat of the moment. However, Darran did continue to express his gratitude for the support he received from The Kingdom, “the Kerry supporters are amazing and a full house in Killarney in the sunshine is hard to beat”.

So why did Darran walk away? Well like many athletes, life got in the way.

Inter-county football requires a lot more commitment nowadays and Darran is far from idle. Darran and his wife now have an eight-month-old at home, he has his family business, Rosspoint, located on the scenic Rossbeigh beach; he’s working with McSport as well as remaining to play with his club Glenbeigh Glencar. 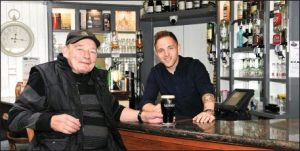 Putting all of that into perspective it’s hard to fathom where he found the time for three field sessions, two gym sessions, physio, team meetings and matches when he was playing inter-county. 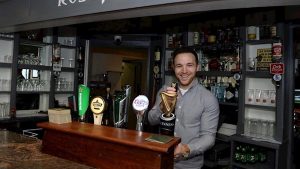 Service with a smile at Rosspoint

He describes lifting the Sam Maguire in 2009 as the pinnacle moment of his career, helping him to grow up. At the young age of 22 he began to feel as though he belonged. Up until that point he admits being a bit “sheepish”, it wasn’t until ’09 that he felt he could take on more of a leadership role.

He spoke about the game on the day and not remembering much other than the moment Paul Galvin after giving out to him after taking an unexpected short free kick. It was after this that Darran said he copped on and got the ball off him to go on and kick a score. He looked back at Galvin to say,  “f*ck you now.” Paul then pointed back at him as if to say, “I knew you’d react like that.”

With a comfortable lead near the end Darran was taken off the pitch. The job was done.

He recalls how he felt after the win. “I wasn’t nervous about playing the game at all. Not nervous about being captain for an All-Ireland final. All of a sudden, I’m petrified. Absolutely bricking it” thinking that now he has publicly to thousands of supporters and not only that but he has to speak as gaeilge. Which is a huge feat for a native London lad, that never studied the Irish language in school.

He remembers looking out into the sea of green and gold and spotting his father with the corner of his eye to the right of him, describing the moment as “surreal”.

The 2011 All-Ireland final was a different story. After playing themselves into a winning position, Dublin caught up and went on to win the game with the last kick of the game. 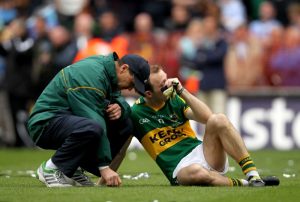 To this day Darran says that he can’t let it go, and is still unable to watch it back.

He remembers being in the dressing room post game and reading a text message that read something like, “Hard luck, you were five minutes from another medal, man of the match and player of the year.” After that, he said he couldn’t deal with it and had to switch his phone off

Understandably people mean well when they say something to soften to blow but realistically there is nothing that anyone can say that will take back the sense of loss that comes along with the heartbreak and sheer disappointment.

After that Darran told us that after that he headed to Marbella with some teammates as well as a friend of his from London to take their mind off things.

Kerry will never change, he says. No matter what happens there is always a sense of optimism looking forward to the next year. It’s a positive thing but it brings a lot of pressure and expectations with it. Especially as it’s not getting any easier to win these championships.

Looking back on his career Darran says he does have a few regrets. He wished he listened to his body more and adopted a “less is more” approach to the training aspect. He said that he pushed his body beyond its limits and as a result missed out on a lot of Championship games.

When he retired he said there were a few days of messages and tributes coming in which was nice. Then that’s it. All over. You’re done. Time to move on.

The medals are at home. He don’t carry them around with him. But he does carry great memories and stories. “Football is great while it lasts but it’s only when the boots are hung up and someone else has the jersey that you look back and you understand what it was all about…” he added. 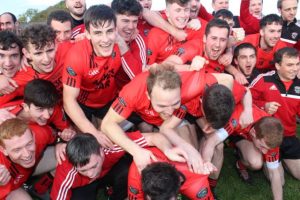 It’s about the friendships you build.