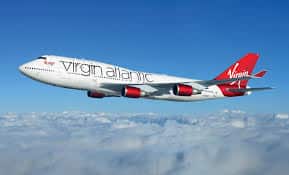 Last week, Virgin Atlantic stewardess Leah Amy shared the sweet story of her new “favourite” passengers: a young gentleman and the elderly woman that he selflessly swapped seats with so she could enjoy the luxurious comfort of his first-class seat.

Am shared the heartwarming story on her Facebook page for her friends and family to so. The post has since gone viral with over 4,100 likes and 1,300 post shares.

In the past Leah has worked on board flights serving well known athletes, supermodels and Hollywood actors & actresses but did not hesitate in describing these two characters as her new “favourite passengers EVER!” 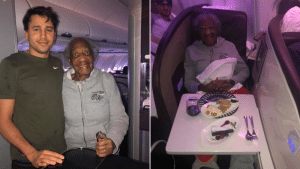 Sources have said that the two flyers spontaneously ignited an “instant friendship” at the airport that they were departing from, when Jack thought to himself that Violet would “get more” out of his prime seat to New York than he would.

Allegedly, it was the 88 year old’s “dream” to sit at the front of the plane, Lead added and Jack was inspired to make this dream come true “out of the kindness of his own heart.”

Once aboard the plane Jack offered up his first-class cabin for Violet’s economy seat, which was unfortunately situated directly next to the economy toilets – but Jack reportedly kept the good deed quiet.

Leah said that Jack “sat in the row of seats directly next to the toilets and never made a peep or asked for anything the rest of the flight. 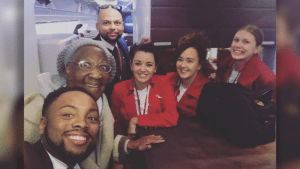 88-year-old Violet with the Crew (FoxNews)

The flight attendant also said that Violet often travels to New York to visit her daughter, and the recent trip was the first in a long time since her knee replacement.  Even though the octogenarian didn’t provide the stewardess with a phone number or an email address to share the photos taken of her on the special flight, Leah told Fox News that she planned to forward the memorable pictures in the mail and share them on social media in the meantime.

Facebook users were quick to praise Jack as a “true gentleman” and a “wonderful guy”.

Dublin is Announced as Worst City in the World
Irish unemployment rate reaches 13-year low of 4.8%